This Video is unable to play due to Privacy Settings.

Do you have any questions on this topic?

To determine the discount rate recommendation Mercer uses its own approach, the ‘Mercer Yield Curve Approach’ (MYC). The MYC is being used for setting discount rates for valuations made for USA, UK, Canada, Eurozone and some other countries. According to this approach, Mercer creates a ‘Spot Rate Yield Curve’ based on bonds from the Thomson Reuter’s Datastream indexes (until 31.5.2015 from Bloomberg indexes) in the Euro area. Since the discount rate in accordance with IAS 19.78 is defined by the ‘time value of money’, which by definition does not incorporate any greater risk of default, Mercer consequently uses only those bonds, which have no interest rate-distorting options, like e.g. it would be the case with call or put options. Furthermore, the bonds with much higher or lower interest rates compared to the other bonds (statistical outliers) are also not considered. A detailed explanation of the method described above can be found here.

For the valuations according to international accounting standards (IFRS/US-GAAP/FRS), the discount rate should be determined according to the maturity of the liability based on "high quality corporate bonds". In the long-term average these rates were only around 0.5% points higher than the rates for (quasi safe) AAA rated government bonds. Therefore, the standard setters, auditors and actuaries typically use AA rated corporate bonds as ‘high quality corporate bonds’. E.g. the iBoxx corporate AA10+ is a commonly used benchmark index.

The  relevant method used to determine the discount rate has a very strong impact.

The companies therefore have a certain  latitude in the choice of the discount rate (although the principles of continuity and consistency still must be followed).

Our recommendation is based on durations of 10, 15 and 20 years. The discount rates for different durations can be determined by interpolating the values from the table below. It should also be noted that the current high level of discount rates may result in lower durations than those in the previous years. 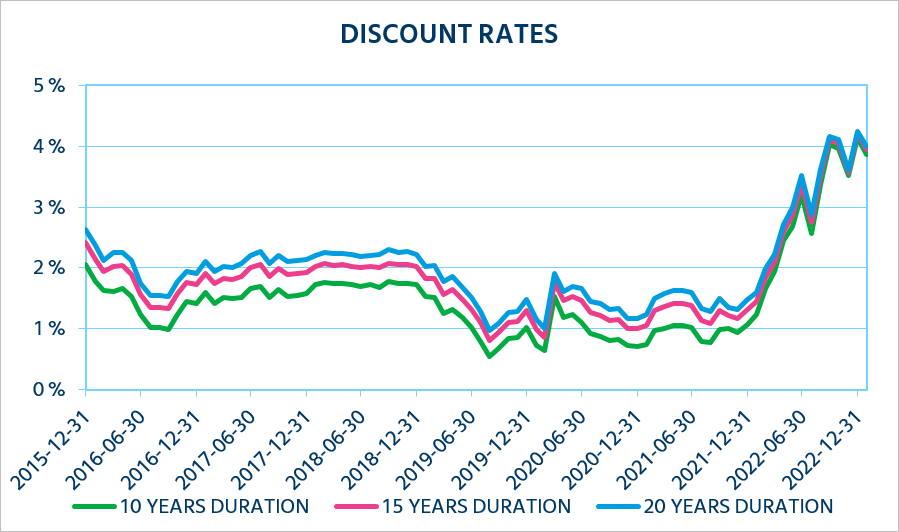 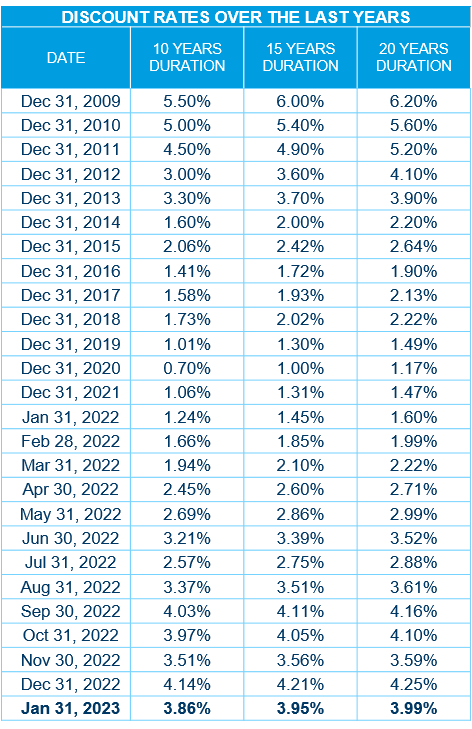 The effects of changes in discount rates lead to so-called actuarial gains / losses. These must be taken into account in equity immediately according to the revised version of ASC 715 (US-GAAP) released in the end of September 2006 or according to the version of IAS 19 (revised 2011) released in June 2011 and applicable from 2013. In ASC 715, gains and losses lead may lead to increased (for losses) or reduced (for gains) expenses in the next year when using the so-called corridor approach and exceeding of the corridor.

The following interest rates can be derived from the MYC for different durations through an interpolation (as of: January 31th, 2023)

Do you have any questions on this topic? Please fill in the contact form. We will get back to you as soon as possible.
*Required Fields